Within the tower, a group of twelve battle through a series of challenges.  Ancient and deadly clockwork automata are spilling forth from a mysterious magicka conduit, and you and your companions must enter the rift, discover the Clockwork City’s Halls of Fabrication, and shut down the Assembly General.  In the Halls of Fabrication, you and your team will uncover the secrets of Sotha Sil’s experiments and put an end to the Fabricant threat. You will not be alone, however, as you will be assisted by the mysterious and powerful Dunmer sorcerer Divayth Fyr himself!

If you played through The Elder Scrolls III: Morrowind, you’ll recognize the classic Elder Scrolls character. As Divayth guides you throughout the halls of Sotha Sil’s complex, he will offer (mostly) helpful advice for dealing with the Fabricant threat. Pay close attention to the Telvanni sorcerer, as he could provide clues regarding some of the Trial’s more challenging mechanics!

The Halls of Fabrication Trial quest begins when you enter the dungeon. There are 5 (technically 8) bosses the team has to battle during the trial:

First Adds in Halls of Fabrication

Right at the beginning you will encounter some trashmobs which are pretty easy to kill, just make sure not to stand in the charge attack of the Kagouti, it will oneshot if you do not block. On top of the hill you will have the first real trashpack encounter. The dead Centurion in the middle will revive some Spheres, there is a total of 2 waves. Make sure to interrupt the Spheres when they are charging up their attack, if they are not interrupted fast enough the group will take a lot of damage. After that you can walk down the hill again and you will encounter some more Kagoutis and Spheres and then you are already on the first boss.

Halls of Fabrication First Boss explained – Elder Scrolls Online There is some very specific mechanics that you need to know to beat this boss. And there is also quite a few ways to actually kill it. Each tank has to tank one of the bosses. Now the most important thing is, they can not be connected for too long. If you have them connected for over 10 seconds their damage will scale higher and higher and eventually oneshot people. You need quite a lot of people with the Purge skill, as you can cleanse a lot of the enemies DoTs from you!

We basically have each boss on a side, so left and right side with each 6 players (4 DDs, 1 Healer, 1 Tank). Tanks then need to coordinate their bosses so when a sphere spawns, that you can break the shield of the sphere and one of the groups can kill the sphere. If you keep killing the Spheres you will not get any enrage phase. Just make sure to be careful when the adds spawn, those little mobs can hurt quite a lot, but they can be rooted with Talons for example. Damage Dealers and Healers need to make sure to not stand between the two bosses, as they shoot sparkles over to the other group. Plus if the beam hits you, then you are pretty sure ripperoni pepperoni.

The second bossfight starts almost after the first one is dead. You have to kill some trashmobs and then the second boss is going to spawn in the middle of the room. This is one of the more challenging bosses in this trial, it will take time to get used to the mechanics. Spread out around the boss, avoid unnecessary damage. As soon as the add spawns it will be tanked near the boss, DDs still focus on the boss and the Centurion will die from the AoE. If not enough AoE dps then make sure to have your ultimates ready when the add spawns or focus it down. 30 seconds into the fight the NPC will shout to go upstairs. 4 DDs with shield and self-heal use the portals on the edge and teleport up, so make sure you assign a DD to each platform before you start the fight.
Players left downstairs damage the boss and kill the Centurions and Conduits.

Refabricated Spider-room in Halls of Fabrication

After the second Boss is killed, you have to use the teleporter into the next area. Now, if you wan to play it save go with the full group to the right side and kill all the Spiders. Once you reach the boss you turn around and go to the other way till you end up on the boss again. Or, you can send one of your tanks to the right side so he can pull all the spiders with him and you meet up on the left side, one person will not aggro the Boss. You can run past him and he will just wait there if you are fast enough and all the Spiders will still follow you. The rest of the group goes to the left side and pulls all the Spiders to a position where you can savely kill them with the others from the off-tank. After those Spiders are dead the next bossfight is already waiting.

This bossfight is a bit special. You can only damage the boss during the “stunphase”. As long as the boss has his shield up you will not be able to damage him at all. You need to press the button on the right side to activate a “shockline” so he walks through it and the boss will get stunned for approx. 15 seconds. During that stunphase you need to dish out as much damage as possible. Make sure to always stand behind the line, if you are too far ahead the shockline will drain your magicka. One boss is back up two adds will spawn, which you need to bring to your next stunpostion so you can kill them there quickly. Here it is very important, that you place your DoTs already on the boss before he gets stunned, to get maximized damage.

Once you figure out how to coordinate the adds with the boss and nuke them down, you should have no problems killing the boss. Just remember, everytime you press the Button, the boss will move faster to the next stunphase.

Junkyard in Halls of Fabrication

You will have to go through a hallway with blades and some adds. Now there is a new type of add called Capacitor, we like to call him “Megaman” 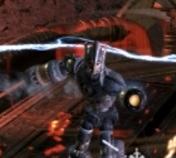 , he has an AoE attack that will be placed on a person and then it slowly grows and exploded. If you do not block it you will get stunned and it starts draining magicka. So make sure to learn the animation of that attack.

After that hallway you will find yourself in the junkyard. You have to kill the big blue Centurion. Once he is close to his death he will revive the spheres around him. Make sure to send a DD to each of the spheres to interrupt them with their shock charge attack. After those are dead, repeat the same thing with the next Centurion and a few of the adds. Once those are dead the big door to the fourth boss will open up.

This is the most difficult bossfight in the whole trial. It requires a high amount of coordination from tanks and then group. I highly recommend watching the bossfight video and the video guide, so you can really understand the fight. The tanks will be busy with the two Two Hander bosses. we split into two groups so we can both dps the Reducer and the Reactor.

If you manage to kill this boss, you will have a happy time on the next one, believe me.

Addwaves after fourth Boss in Halls of Fabrication

After the fourth boss is dead, you will have to fight with some more adds in some long hallways. They are not really a big danger, just make sure to focus the Megaman add first. You will also find some electrified water, which will drain your magicka if you stand in it, so make sure to avoid it.

The last boss is easier then the fourth one. Once you figured out the positioning you will not receive a lot of incoming damage. The boss himself is not really the biggest threat here, the adds are more dangerous.

There is not a lot of difference in the Hardmode of the Assembly General. All you will get is:

There are no new extra mechanics.