The Maw of Lorkhaj is a 12-person trial in Elder Scrolls Online and is currently one of Elder Scrolls Online’s hardest content. It is located in Reaper’s March. Within the temple, groups of twelve battle through a series of challenges and ultimately face Rakkhat. Trials are special PvE group instances in Elder Scrolls Online, which can be identified by the trial-eso-dungeon icon. They have special mechanics and group tactics for 12-player groups to accomplish, and present unique rewards for players. This walkthrough will be focused on how to achieve success on Veteran Mode.  Note: there is an additional Hard Mode option for final boss. This will be added at a later date.

“With both Normal and Veteran difficulty modes, the Maw of Lorkhaj will test your allies and your courage. Breach the gates of an ancient Khajiiti shrine, and confront the ghostly legions of Namiira in eerie lamp-lit corridors – complete with ruthless new enemies, terrifying bosses, and a wealth of treasure from the depths of Oblivion.”

Before entering the trial, the trials leader will divide the raid into 2 groups, 6 each (1 tank, 1 healer, 1 Mag DK, 3 DPS) due to the fact that the second boss is actually two boses that need to be killed within 20 seconds of each other.  It’s important to understand before you begin that there are many strategies to use to battle through the trial.  Each successful group will determine their own preferred way, so be sure to clafify in advance the strategies used if you will be running with different trial leaders.

Every trash mob will have some or all of the elite enemies.  If the Dro-m’Athra’s spawn, they need to be killed in this order:

The tanks will need to split the Elite enimes during mob fights as follows:

Synergies need to be constantly available for both Tanks using Alkosh, so everyone needs to be using as many synergy skills as possible, such as shards, orbs, liquid lightening, etc.

You will encounter a small mob pack of conjured monks, the easiest enemies, who will appear alongside the elite enimies throughout the trial. Next, a Sun-Eater, Shadowguard and a Dreadstalker will spawn.

Kill the Sun-Eater laying down pre-damage and dropping ultimates as soon as it appears.  Move to he Dreadstalker, who the tank has facing away from group.  Then kill the Shadowguard.

Go throught the door on the left and up the stairs.  Lay pre-damage in front of the stone archway to the right, as the Sun-Eater will spawn here.  Next, kill the two Dreadstalkers, which the tank will taunt at the top of the hill.  Finally, kill the Shadowguard, which the other tank will have brought to the bottom of the hill away from group.

Head up the hill and get ready for the final mob before the first boss fight.  Kill the Elite enemies in the way and same order as above, with the tanks splitting the Shadowguard away from the Savage.

Before you start the fight, notice the cleanse pads around the room (refer to the second bullet below for cleanse strategies).  One healer and one Magicka DK will be on each side of the boss.  To start the fight,  the tank will pull taunt the boss in the middle of the room and pull him slightly towards the right hand wall (as you enter the door) to be positioned in between the first two cleanse pads.  The melee players will be the closest to boss, in a loose stack around him, leaving enough room between players that curses won’t spread.  The range DPS will be in a loose stack around melee players, again with enough room that curses won’t spread.  The off-tank will be positioned to the right of the main tank, far enough away as to not spread curse.  Healers will be positioned one on each side to be able to keep all playes in healing springs range. 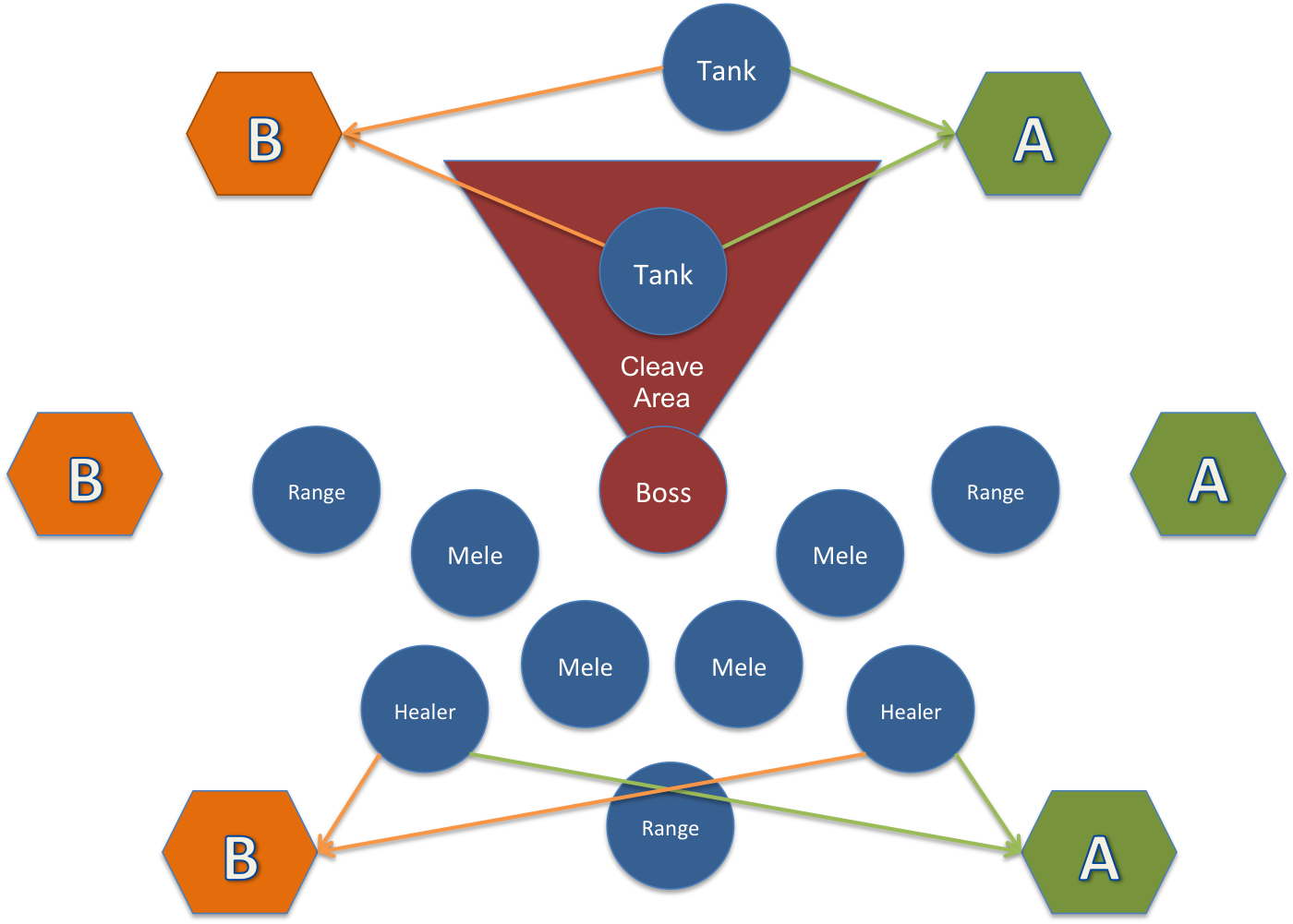 Be sure to loot the boss before moving through the door.  In the passthrough room to the next area, you will find heavy sacks and chests to open.

In the next area you will encounter more elite enemies.  The first wave will be Ogres, with the second wave being Banners.  Kill the enemies taking care for tanks to split the elites as indicated earlier and for DPS to target in the order listed above.  Continue down the path, taking care of all elite enemy groups, with tank and off tank taunting their respective elites.

Once you reach bototm of hill, there will be 5 waves of elites that spawn.  NOTE: If the group wipes at any time, you will have to start the entire elite mob fight from the beginning. All DPS and main tank will run into the cave to the left to DPS elite who spawn there, while the off tank taunts the Ogres who spawn in middle of the area, off to the side.  Off tank will then pull Ogres over to where the DPS just came down from upper hill, meeting main group there to kill the Sun Eater as soon as it spawns.  Ogres will be killed with AOE damage.  After Sun Eater is killed, off tank will move towards door to far right of area taunting new designated elites which spawn there, while the rest of the group targets the banner elites in order as described above.  Main group will then move to off tank to kill remaining elites and to be ready for next Sun Eater to spawn.  When banner elites spawn again, tank and off tank will once again pull respective enemies apart from each other.  Once you kill the final elites, the gates to next area will open and you can loot the chest.

Split into the two groups as discussed at beginning of walkthrough, with each side noting the boss that is on their side. Each time there is a room split, all players will need to quickly return to their original bosses, whatever side that might be.  To start the fight, all players will lay down pre-damage on the right side, where Vashai will initially be taunted.  The reason for this, is that typically S’kinrai takes more damage during the fight, as his mobs spawn close to him so it’s easier for the DPS to continully damage him and mobs together.  Vashai’s mobs spawn far away from him, hence pre-damage at beginning of fight, as well as all DPS on him during Prayer Phase is necessary.  After pre-damage is laid down, both tanks will then taunt their respective bosses and players will then split into their two groups, with left side players continuing to do distance damage to Vashai (who is on the right side) until the first mechanic, Color Change, described below.

The twins fight has 4 main mechanics:

After defeating the twins, loot the chests and heavy sacks in passthrough room and head to next area.

Go through the gate, making sure no one gets left behind as the gate will close.  Players can get through the gate after closing, but it may take a few tries to get the Open Gate prompt.  Once inside, you will see giant panthers, which cannot be taunted.  Everyone should mount up and upon trial leader command, start riding around in a circle together.  As soon as each panther “marks” a player for death, everyone can dismount and begin DPSing the Panthers.  The players who are marked need to run from the panthers so as to not be caught.  After 30 seconds, both panthers will mark another player.  The group will just follow the same instructions above until both panthers are killed.

Next are multiple waves of  Banner enemies which will begin with the pull of a chain.  There are two chains to pull, both at the top of the right and left paths. Unless you are going for the achivement to pull both chains at once, only pull one chain at a time.  Note that if the group dies during this phase, it will begin all over again.

Once all enemies have been killed, proceed up the hill to open the chest and into the next area, to battle more waves of Banner enemies.

The next room is long and narrow.  Here you will battle three waves of Banner enemies and Cursed Monks which will drop down from above with an AOE that does massive damage.  This can be mitigated if Caltrops is continually thrown in the area.  Someone in the group will get the ‘Mark of Death” placed on them by the Dreadstalker, making all panthers target you. Player should run around the outside of the room to pull all panthers away from the rest of group.

Head through the passthrough room to once again loot the chests and collect items from heavy sacks, then proceed into the final room for the Rakkhat fight.

The High Lunarium room is divided into two main areas:  one large inside room and one outside area, called the backyard.  Before starting the fight, the trial leader should assign pads to all DPS (1-8) for the lunar phase.  Typically you would alternate range and melee DPS with the backyard players assigned to pads 1 and 8.  The trial leader should designate two players and one backup to run the outside (Backyard) area, which will happen a few times during the fight.  Players who run the Backyard will receive the Shadow Debuff and will need to cleanse each time after they travel back through the door to the main area, on one of 4 cleanse pads in each corner of the main area.

There are two items of note:  Each time one of the pads turns gold, the first player who stands on the pad will receive a Lunar Bastion Buff, giving them reduced damage from Rakkhat and other mechanics.  Therefore it’s important that only the main Tank steps on the pad first.  After the light goes away from the pad, it will be replaced by a dark blue glow, which indicates the Shadow Defuff is now active on that pad.  Anyone who steps on the pad will receive a healing debuff, reducing health.  Therefore it’s important that none of the DPS ever step on the pads when they are blue, as it will force them to have to die, as there are no cleanse pads avaialbe for DPS, only the Backyard runners.  Any deaths in this fight mean a significant loss of DPS and can affect success.